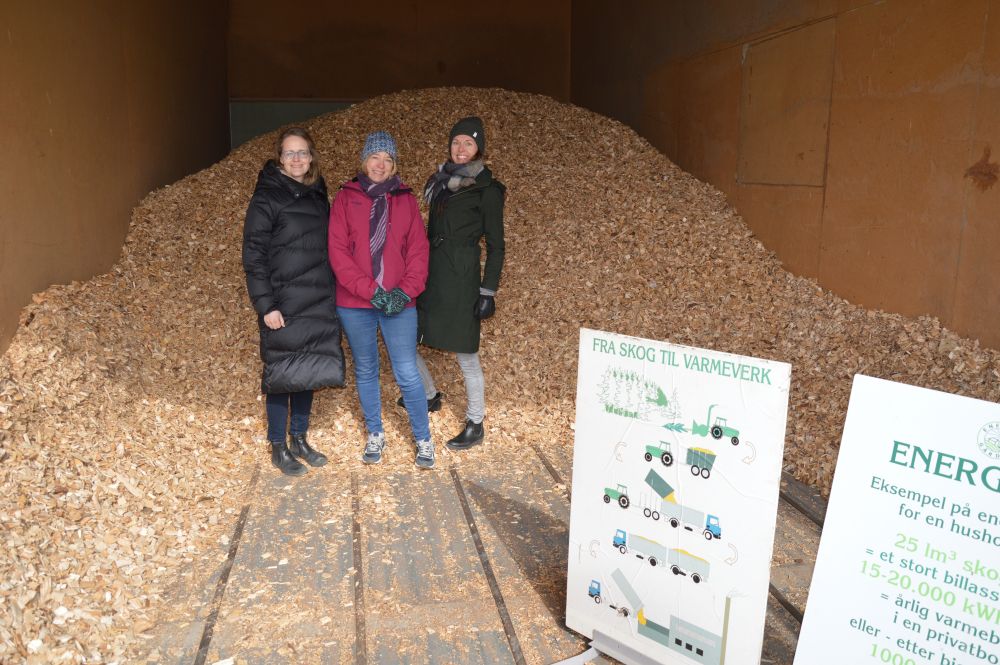 As the first green municipalities in Norway, Gran, Lunner and Jevnaker have implemented many climate measures and are setting good examples of how to create local and innovative energy communities using bioenergy.

Energigården [The Energy Farm] is situated in rural surroundings in Innlandet county municipality, looking across Brandbu in Hadeland. The large red barn houses wood chippers, boilers for bioenergy and solar energy, and a wood chip dryer. It is where Erik Eid Hohle, a pioneer in and strong advocate for replacing fossil fuel energy sources with bioenergy, works. He is convinced that the need for bioenergy as both a heat source and a fuel will grow in the coming years.

Ever since it was established in 1991, Energigården has been a driving force behind the development of the bioenergy industry. It has also been awarded the Nordic Council of Ministers Bioenergy Prize for its activities in spreading knowledge and information about bioenergy. COME RES partner, CICERO, recently visited the Energigården to find out more.

"It has always been my goal to launch initiatives here and now, and not to wait for technology or infrastructure that might not come along for a long time. We already have enough technology in place, and our goal has been to begin by looking at energy efficiency," says Eid Hohle. Energigården now has several large target groups that benefit from his expertise.

"We work extensively with the agricultural industry. A typical Norwegian farm has huge biomass reserves such as wood chip, firewood and straw. This is waste you can either store or use to produce energy. More people now see the possibilities and want to use by-products from farming and forestry in new ways, such as by converting those reserves into bioheat or biofuel," says Eid Hohle, who holds courses and helps develop businesses plans for businesses all over the country.

Bioheat in schools and sports centres

The environmental and energy sectors are also important target groups for him.

"In Norway, a lot is controlled by a few actors – the powerful institutions. This makes it difficult for small local actors to break through," says Hohle, and mentions several institutional barriers that make it difficult to get energy communities up and running. He finds that Norwegian authorities are more concerned with the energy market, and that the heat market and the potential it has to offer is not given enough priority – despite the fact that heat is three times bigger than energy in the end market.
In Hadeland and the surrounding districts, however, many have benefited from Energigården's future-oriented knowledge and activities. They recently made it possible for a local school to have heat supplied from a farm close by.

When this farm was to become the heat supplier for the entire school building, we helped with everything from supplying the wood chip to operating the system. In this way, the farmer received a larger share of the profit from the refining operation at the same time as the municipality that owns the building did not have to manage the heating system.

Eid Hohle gives us a tour of the barn, showing us the many rooms and machines it holds. We see how the wood chip is dried and stored before being blown into a large silo from which it is retrieved to power a heating system. The modern wood chip heating system was supplied by Bioland, which has 90 systems in operation around Norway. It supplies energy boilers to farms and heating suppliers of different sizes. Heating with bioenergy today costs between one third to one quarter of the price we pay for electricity.

The forest as a battery factory

We also had the opportunity to meet Randi Eek Thorsen, the mayor of Gran, during our visit to Energigården. The mayor shares Eid Hohle's commitment to nature, the forests and the development, and believes the fact that the Hadeland municipalities were among the first in Norway to make climate and environmental plans was no matter of chance.

"There are many natural assets in this area; we have fertile soil and interesting geology. I think this balance between people and nature, and the wish to take care of the forests and use them properly, partly explain our early engagement," she says, adding that the forest is a source of carbon storage and capture but must also be seen as a resource for biomass that can be used to replace fossil energy sources. Eid Hohle stresses that we should recognise the role the forests play, and the significance of using forests and wood as renewable energy sources.

"Many talk about building massive battery factories, but the forest is already standing here like an organic battery factory in itself. Managing the forests is the most environmentally friendly thing we can do. It's important for us to get across that bioenergy is a cheap and meaningful climate measure," he says. He also highlights the importance of local and knowledgeable resources in processes like these: A mayor is often more important than an energy minister, and the ability of local business communities to adapt is important for realising such initiatives.

Energigården in Brandbu is not the only one finding good energy solutions in the Hadeland area: Klimapositive hyttliv [climate-friendly cabin life], a project led by Brandbu and Tingelstad Almenning, is developing an innovative second-home development in Lygna.

"We want to achieve climate benefits in the form of energy consumption, water, wastewater and building materials. For example, the cabins will be mounted on concrete piles to minimise the impact on nature, and our plans include solar panels and smart common systems," says Lars Olav Jensen, the general manager, who also promises a 30-per-cent reduction in greenhouse gas emissions during the development phase.

Vigga power plant is another example of a forward-looking initiative in the municipality. Two farmers who also are landowners are take advantage of a nine-metre height of fall in the Vigga river to a run-of-river power plant with an annual production of 300,000 kWh, which is equivalent to the energy needs of 30 household.