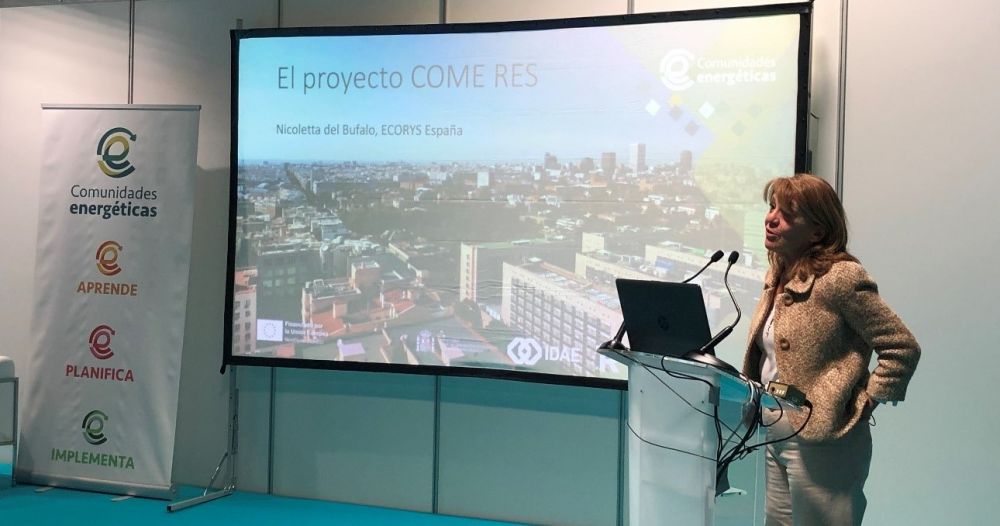 On 17 November 2021, the COME RES team in Spain showcased and promoted the work of the project, in advancing renewable energy communities, at the International Energy and Environment Fair, GENERA 2021, which focussed on the theme "The Opportunities of the Recovery Plan for the Energy Transition".

Nicoletta del Bufalo (ECORYS Spain) presented the objectives, scope and outcomes of the COME RES project so far in the framework of the side event organised by the Institute for Energy Diversification and Saving (IDAE), which focused on the processes needed to form an energy community. She led the debate and reflections on the benefits and obstacles for citizens, SMEs and local entities to get involved in the production, distribution and use of their own energy in order to bring environmental, economic and social benefits to the community.

Both the conference and the side event were held at a decisive moment in Spain and globally. The Spanish government sees the energy transition as a fundamental axis of its policies; it has a prominent position in the new general state budgets presented and in the ‘Recovery, Transformation and Resilience Plan’ (PRTR), while international climate policies and negotiations are at the core of public discussion.

The benefits of the energy transition, and particularly of the development of renewable energy communities (RECs), were illustrated through successful examples, which are spreading across the Spanish territory. The so-called ‘Barrio Solar’, for example, was the local experience presented from the city of Zaragoza (Aragón); and the audience also learned about the energy community ‘Energía Bonita’, which is taking its first steps in the island of La Palma and is part of the Spanish COME RES stakeholder desk in the Canary Islands.

In parallel, a series of interactive roundtables highlighted the challenges and opportunities of community energy for local governments and the importance of SMEs and industrial parks for REC development in Spain. On the former aspect, Luis García Benedicto (IDAE) recalled not only the importance of the transposition of the relevant dispositions in the RED II Directive, but also the establishment of help desks at regional and local level, in order to mitigate the current lack of information and guidance mechanisms perceived by local actors and citizens. As a key obstacle, participating stakeholders highlighted the lack of flexibility of the current regulations, illustrated by, for instance, the 500m distance limit from the electricity generation source in self-consumption schemes.

Learn more about the Spanish stakeholder desk here in English and Spanish.